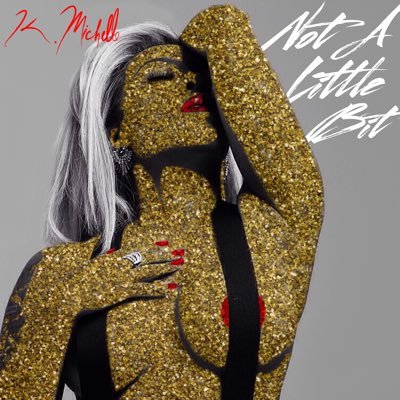 I listened to Beast1 Radio (on my Mac) for the fist time today. Why? Because my ABSOLUTE FAV, K Michelle, premiered the single, #NotALittleBut, for #Album3. Because I follow her on Instagram and Twitter and have setup alerts on one or more of those mediums (a girl will not tell), I instantly got the notification to tune into Beats1Radio a mere 30 minutes before the premier was played. The artwork is amazing. I looked at it and literally said to myself WOW! You can listen to the song on YouTube here.

I listened to the song, smiling the entire time and nodding my head in anticipation of K’s new single. And I was not disappointed. The song is fire, just as  expected. Make no mistake, K Michelle has a HUGE following. I went to her concert in Atlanta last year (wouldn’t miss it for the world) and 99% of the audience sang every single word of every single song (yours truly included). I lo♥e K Michelle. I continued to listen to Beats1 Radio for the next 90 minutes and I actually really enjoyed it. Rev Run was up after K’s premier talking about the origins of hip hop, which was great. I WILL tune in again.

So now, here’s the funny part. I’ve written about my preference for Spotify before; but, after tonight’s experience I started revisiting in my mind why I picked  Spotify over Apple Music in the first place. The only thing I really remember about Apple Music was liking that the background was white (Spotify’s is black). nothing else really stood out. I also thought about the Spotify features I use the most (playlists and top tracks in the US). So then I searched for “Spotify vs. Apple Music” (Bri’s Commandment #4) just to see what would come up. Here are some of the top headlines I found – I did NOT read any of these articles, just the titles:

(If you can’t tell, I’m referencing these articles so I can revisit them when I get ready to do another analysis, RE: Spotify Music vs. Spotify)

I haven’t made a move or a decision about my music streaming service based on the limited facts/notes listed above. The point I’m trying to highlight is that I am actually THINKING about why I chose Spotify over Apple Music, just because my absolute favorite artist debuted her new single on Beats1Radio, just be K Michelle pulled me there. If tonight would have never happened, I wouldn’t have given Apple Music two seconds of my brain power. I had been chalked that off. This profound because I never really thought an artist would have any influence over my decision about which music service I subscribe to.

Music is everything to me and I must have unrestricted access, hence I WILL pay. Maybe I’ll give Apple Music another try. Maybe I’ll stick with Spotify. #staytuned #2postsin1day #winning #loveblogging